An interactive section of TheLetterheads.com

Off Topic Posts may be deleted at the discretion of the web hosts. ABSOLUTELY NO SHARING OF COPYRIGHTED FONTS, CLIP ART, or VIDEOS!

Not sure about the rest of the readers here, but I love to watch all I can of the Olympics.
It is riveting drama. Real drama—not scripted "reality show" stuff we are seemingly forced to endure now. 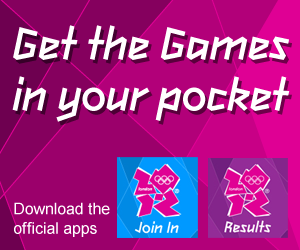 I have to say, I am not blown away by the letterstyle they chose for London, but I guess someone in some committee liked it.
Otherwise, the Olympic event banners, signs, props and bright colors all around are refreshing.

That logo was very controversial when it first came out many did not like it , including me, but I think once it was out there they could not change it . In 2002 I was working for a large sign company that did most of the signs banners etc for the commonwealth games here in Manchester. What happens is that the games commitee employes what they call the LOOK team whose job it is to take the designs and incorporate them into each and every venue, flag ,bannner, sign etc.The main object is to make it all look good on TV. If you look at all the major games of the last few years you will see diiferent graphics but a similar LOOK to it all . Part of the reason for this is that the look team since Sidney in 2000 has been an Austrailian company that has done the look for all the games. When I worked back then it was an interesting insight to how it all goes together.
Terry Colley
Stockport, England
Signwriter/maker
Top

Hi Terry,
Thanks for the note. I was watching a little of the Olympic coverage on TV this morning while eating a bowl of cereal. Yes, I like the overall Look, feel and consistency of the signs, banners and graphics. And, it definitely has the same look and feel of all recent Olympic games. I was mainly commenting on the quirky letterstyle they chose for this Olympics. Maybe it grows on you as you see it used more, but when I first saw just the word "London" in that font, I wasn't too moved by it.

Hi Mike
I take your point on the font, we have been seeing it for at least a couple of years now i am still not liking it. I think for most here it is just too far away from where we are in our swirly scrolls and busy designs. Though the oympics are a refreshing change on the TV
Terry Colley
Stockport, England
Signwriter/maker
Top

By way of comparison, here are some photos of what Roger Excoffon (type designer of Mistral, Choc and Antique Olive) did for the 1968 Olympics. Carl Rohrs took the pictures at an exhibition of Excoffon's work in Paris last year (I think).

Can't say tha I really get that logo they came up with. Just doesn't do that
much for me.
For those that are counting USA has 37 medals to China's 34.

The larger logo probably makes more sense if you live in London. I assume it is the shape of the venues of the Olympic village. If not that, maybe some can explain it?

I never realized the jagged, block logo was really to be read as numbers: 2012

I never liked this logo , When it first came out I had seen some really clever designs forwarded to the Olympic commitee and they ended up picking this one. It's all over London even on some of the driving lanes, I got a ticket for driving on the olympic lane for just 2 minutes last week £145 fine! ouch! Enjoying the games though, organised very well and the stadium is apsolutely amazing! uk are doing well with the medal tally, Husain Bolt runs the 200mtr tonight along with his mate Blake should be a good one to watch.!

Return to “The Hand Lettering Forum”

Sponsored in part by the Denver Chapter of Letterheads.
© The Hand Lettering Forum. All rights reserved.