An interactive section of TheLetterheads.com

Off Topic Posts may be deleted at the discretion of the web hosts. ABSOLUTELY NO SHARING OF COPYRIGHTED FONTS, CLIP ART, or VIDEOS!

If you got the coin you could buy this for me...my birthday is in a few days.

Wow! Pretty sure this was a Chicago sign painter judging by him mentioning Chicago and "Armitage" (a main street in Chicago) in the diary entry. Perhaps one of Atkinson's pupils!
Top

Way cool, although it is strange that he did not put his name on his kit. The usual folded packets of bronze powders, a few books of Hastings patent leaf, some dutch metal or aluminum. Also some old brushes - in quill, but without handles, like Ray LeBlanc talks about. And a small tin of Murphy's varnish. A stencil alphabet and stencils for a cow. Perforated patterns for corner flourish. Strangest to me are two 'automatic brushes"(??) that look like they could be for doing stencils - fill up the tube with paint (like a Bugler striper) and dab with the brush end through a stencil. Maybe.

Also two bits of writing - they show the top pages, maybe there is more underneath, maybe not.

And (I think) here is the Armitage varnish he was using, but I don't know what the "var chicago system / 4 days" means.

So. I think he is keeping track of particular vehicles (carriage, or omnibus, or draywagon, or ??) and when they get revarnished. He may not have been a letterer but a painter/decorator; that was a respected trade. The stencils and striping brushes would go with that.

Detective work, trying to learn from our elders and betters. This sort of thing should be in the American Sign Museum.
where am i? Now, when i need me...
Top

Lee, I think you nailed it with Coach painter ... Maybe a Dairy? Seems he worked there for some years looks like he could of went from horse-drawn carriage and wagons to Mack's and Ford Model TT Trucks. (New head liner)

I think the one line is (1 Body color Flat). 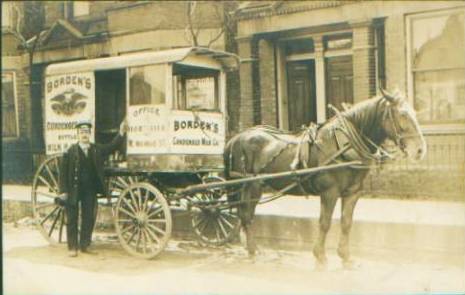 And Happy Birthday to you Robare.
Sure I paint thing for my amusement and then offer them for sale. A brushslinger could whither en die from lack of creativity in this plastic town my horse threw a shoe in.

It's quite possible judging from the tools of his trade that he was at one time a trolley painter that decorated and gilded trolley cars for the Reading Traction Co. in Philadelphia.

See this image and more at: http://donsdepot.donrossgroup.net/dr886.htm

What's On Your Book Shelf ?

Or visit this site: http://philadelphiaencyclopedia.org/archive/streetcars/

What's On Your Book Shelf ?

A few years back a friend picked up a loaded sign kit at an estate sale for me. I was the kind with cantilevered shelves and a rubber step on top. Using it s a seat gives you two heights to work from, perfect for truck door lettering. He spent $250 for it and my wife freaked when I bought it from him. She relaxed after I inventoried the brushes at over $2,000 worth plus tons of tools and gold leafing supplies. I cherish it as it is the exact one I wanted since I was 17 and just starting out. Took me until age 44 to finally get one. Hard telling how old it is but it is rock solid and I have stood on it a lot to letter windows.
Hand lettered signs... the ultimate urban art
Top

Really interesting find. Mr. Glawson would have picked this up in a second just for the note books I'll wager. Would love to see Arlo's kit and find as well.
Top
Post Reply
9 posts • Page 1 of 1

Return to “The Hand Lettering Forum”

Users browsing this forum: No registered users and 7 guests

Sponsored in part by the Denver Chapter of Letterheads.
© The Hand Lettering Forum. All rights reserved.